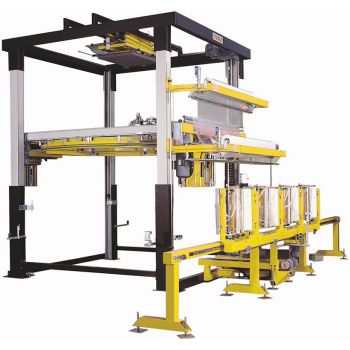 A new time- and labour-saving system, which automatically changes the reels of stretch-wrapping film. As well as replacing empty reels - without manual intervention - the system also changes partially-used reels if the wrapping film breaks. Suitable for complete shift operation.

The Reel Change System consists of a number of cassettes with stretch film reel, a manipulator and a magazine for storing the cassettes. When the system senses lack of wrapping film it automatically changes the film cassette and the wrapping continues without manual intervention.

The cassette change takes about 60 seconds. The number of cassettes can vary between 2 and 10. Up to 1300 pallets can be wrapped with one set of full film reels depending on pallet dimensions and wrapping cycle.